The amazing story of how the creation of digitally animated full-length feature films changed the art of animation forever in the late eighties has an unlikely beginning in the work of celebrated Pixar chief creative officer and Toy Storycreator John Lasseter. 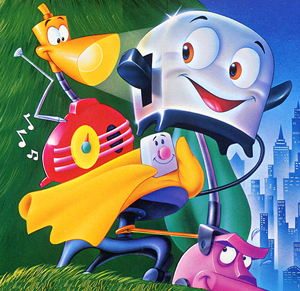 In the enlightening 2007 documentary The Pixar Story, Lasseter tells of his early dream of using digital animation rather than only traditional animation via paper-based drawings. He happened upon a sort-of science fiction novel for kids, called The Brave Little Toaster: A Bedtime Story for Small Appliances by Thomas M. Disch (1980).

Working at the time as an animator at Disney, Lasseter and two colleagues became excited by the potential of using digitally animated backgrounds to enhance the depth perception of traditional animated stories. They enthusiastically made a short test film called Where the Wild Things Are, using this technique.

Positively motivated by their results, they pitched their idea of a partially digitally animated feature film based on The Brave Little Toaster to their superiors at Disney. Brand new things being what they are and corporate politics being what they are, minutes after the pitch meeting Lasseter was called onto the red carpet and fired from Disney. He didn’t follow due process when he bypassed someone in the chain of command in his enthusiasm to get the movie made.

In later years Lasseter also faced incredible difficulties in getting the original Toy Story made. Pitched as the world’s first fully digitally animated full-length feature film, it almost did not see the light of day. After Lucasfilm Computer Graphics was acquired by Apple founder Steve Jobs and became Pixar, Toy Story was released in 1995. Having spun off two sequels, the original Toy Storyhas so far amassed gross income of an estimated $354m (IMDB).Having assisted in changing animated feature films forever, John Lasseter has by now won two Academy Awards (Oscars) and has been nominated a further four times. And it all started with a brave little toaster.

Louis Eksteen is the Managing Director of Twisted Toast. Follow him on Twitter or connect with him on LinkedIn.