Insights and thoughts from Design Indaba 2016

The Twisted Toast design team attended the Johannesburg simulcast of the final day of Design Indaba 2016, and came back with new ideas, things to think about and a ton of questions. This was my first time at the Indaba, so I was looking forward to the wonder of creativity that is mythologised by past attendees. I was not disappointed.

The idea of not judging the experience of others, especially regarding the way millennials interact with the world popped up in a number of presentations, from the young Global Graduates asserting the value of their experience of the world, to the digital designers and storytellers trying to engage with these fresh adults. Cecilia Martin and Klasien van de Zanschulp from Amsterdam’s Lava Lab, demonstrated how they used interactivity and social networks to enhance the gallery experience for young visitors by allowing them to interact with historical figures in paintings through a Facebook style social network, which led to visitors learning history in a highly engaging way. Treating the interaction with the environment through smartphones as “the new social” rather than “anti-social” made for a highly effective communication. The world is changing to accommodate the next generation and it is time for agencies to embrace this culture.

Another apparent idea was that of working locally. Rwandan architect Christian Benimana spoke of using local artisans to construct the facades and bricks of local buildings leading to a real connection between the buildings and the communities they served. They became more than just schools or hospitals, they became tools for enriching the communities. The artisans now have more opportunities to grow the local economy, are starting their own businesses, becoming agents of change, and loving the place they are in. Especially inspiring was the team of woman masons taking on stereotypes by doing work traditionally given to men.

Global Graduate Vera de Pont presented the concept of an Open Source Fashion Manifesto, and her intention to cut out the steps between clothing designer and consumer with some innovative designs. With the internet so pervasive, patterns designed by a designer in Amsterdam could be constructed by a tailor in Cape Town. The concept is exciting in its early stages, and hopefully leads to more conversation amongst designers and consumers alike.

The highlight of the day was undoubtedly Production Designer, Alex McDowell who has worked on a range of interesting projects from working with the Sex Pistols and Iggy Pop to designing for films like Minority Report and Man of Steel. Alex told the story of how he was hired by Steven Spielberg to work on Minority Report before the script was even written, and how his vision of how Tom Cruise’s character interacted with the world helped to develop the script and final story. It was this that probably led to his work in immersive storytelling, and making the audience the centre of the story through the use of multiple platforms like Augmented Reality and Virtual Reality which allow the audience to experience the story in an infinite number of ways. The possibilities of this technology and way of thinking is endless, and we seem to now be in a world of experiences and not just watching. Whether it’s a social network shared with the subject of paintings in a gallery, or being able to be inside the world of fictional characters through VR or AR, it really is an exciting time for storytelling.

Please Design Indaba, can I have some more?

With all the talk of interactivity, Augmented Reality, and speaking to local communities, it seems like a missed opportunity that there was nothing more happening than watching a screen in an auditorium at the simulcast. Great ideas were presented by inspiring speakers, but the experience of the Design Indaba could’ve been so much more with the opportunity to touch or play with something. Digital galleries through the app, or screens placed in the foyer would’ve given us the ability to take a closer look at the work of the featured artists and designers between talks. Installations featuring that work in more traditional media would’ve still provided a closer and more hands on appreciation of the work. Installations featuring work local to the city in which each simulcast was held could’ve helped to foster the local creative community of designers and artists. Instead it was a bit like watching the Cape Town festival on a projector. I do hope to see this kind of thing at future simulcasts, giving me a reason to stay after the projectors turn off, or even compelling me even more strongly to attend the full festival in Cape Town.

It was a fantastic and inspiring day at the Design Indaba, and I hope it grows to be an even stronger driving force in the creative communities of South Africa. 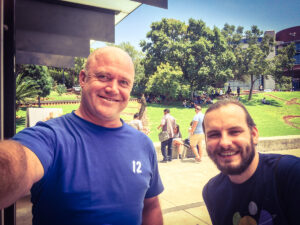 Erik and Quinton at Design Indaba 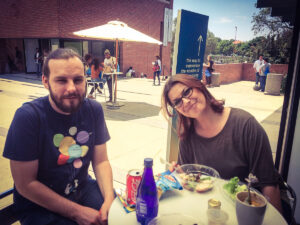 Quinton and Angela taking a break